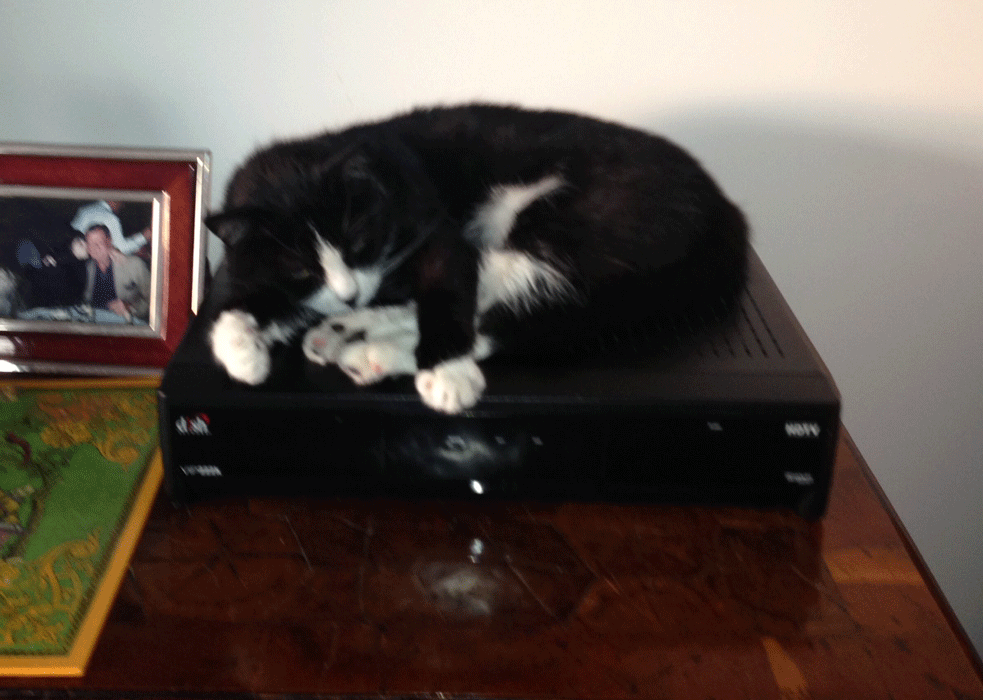 Well, that’s not what Horace Greeley said, but it is the direction he suggested to the young men of his age – head out to the Western US, where opportunities abound. Skipping to the present, fate beckoned earlier this year, and Susan was presented with an opportunity “she could not refuse” – a fascinating challenge which would require her to either embark on a debilitating commute between New Jersey and Chicago or to relocate entirely to the Chicago area. Ultimately, we flew out to Chicago, hooked up with a real estate agent and began to look for a place in the suburbs which would be suitable for our small household and, of course, the 42 TMF cats who would eventually accompany us.

Finding a reliable company to transport all the cats in one vehicle with attendants who would make the trip without an overnight stop was the second obstacle, and it took a lot of zooming around the internet before we found a fine, experienced operator in Texas (with a branch in Wisconsin). They had a number of specially-outfitted vehicles with individual transport containers, water, food, and knew what they were doing. And they had just one with a capacity of 42 containers. It was a 1405 mile trip, which was challenging enough without trouble from Mother Nature, in the form of severe winds and heavy rains.

Susan was there to pack them aboard at 10:00 am, and she planned to take an early afternoon flight back from Newark. Horrible weather caused many flights to cancel, and hers was in fact delayed for six hours or so. Meanwhile, high winds forced the transport vehicle to pull over and wait out the storm on several occasions. In the end, Susan arrived at 1:00 a.m. and the cats rolled in around 2:15 a.m. By the time that they had all been introduced to their new homes, fed, given new cat beds and water, with plenty of kitty-litter, it was 6:00 a.m., and all were exhausted, but safe, fed, and sleeping.

We were fortunate to have found a beautiful 40 acre farm about 50 miles west of Chicago, most of it in alfalfa, with a horse barn/stable and a sizable arena/storage facility, both of which we were able to quickly adapt to perfect housing for the cats, along with the main house, of course. As you’ll recall, we have always had rooms for them in the barn and in several sections of the house in New Jersey, and they have even more space to live and play out here. We plan to post photographs of the buildings, but we assure you that they are thrilled with the new environment and have adapted well. For now, you can see the farm if you travel via Mapquest to the address: 45W300 Middleton Road, Hampshire, Illinois 60140. If you then select “satellite view” and zoom in you’ll see the house on the little hill and two sizable outbuildings.

One building is a stable with living quarters upstairs and an office, and the other is a huge, perhaps 10,000 square foot indoor riding arena, also with an office. Both buildings are heated and have running water. The house has a huge and finished basement and 28 of the cats have the run of the house, while the others live in the two outbuildings, although they visit the house at will.

A funny thing happened when they yawned, looked around and we (and they, of course – they are cats, after all!) decided which part of which of the three facilities they would call home. You can count on the fact that Susan created enough shelf-space, hiding space, closet-space, sofas (with hiding spots underneath), cat beds, games and other diversions to keep all the cats happy when they are indoors, which is all night long, and part of the day.

The truly odd development involved cats apparently changing personalities as they adapted to the new environs! Some formerly shy cats became more outgoing and some powerful/dominant cats became somewhat reclusive…less interested in wandering about and pushing others around. One feral cat started jumping up on the master bed. All-in-all, these changes were very positive. Since we arrived, seven months have passed, and during that time, three older cats passed away and five others found new homes. Very few of them have been ill, and they are enjoying excellent quality of life.

Neide and her son Elbert feed the cats in the morning and afternoon and change the kitty litter as needed. Neide has been doing this for 17 years now and Elbert for perhaps 10 years, and they know the cats very well. They often sit with the cats or lie outdoors on the grass with them and, together, we make sure the cats have plenty of individual love and attention. Of course they are carefully observed for coughing, changes in eating or playing habits or attitudes, and temperatures are taken when something suspicious is going on. Just like a horse trainer knows what’s happening, we understand our cats and their personalities and habits.

That said, perhaps it’s time to give everyone an update on who’s who – a little glimpse of their characters and how they are doing? Maybe not this update, but soon, we shall take a picture of each cat and post a note on each which we can update. The problem, of course, is the well-known difficulty in “herding cats”! It will happen, Un Bel Di, as in the words of Puccini’s librettist, Giuseppe Giacosa.

So here’s the line-up, by location:

In the Main House:

It will be a major project to put pictures of all the cats on the web-site, but we’ll try to get that done over the winter.

All the medical histories were delivered by the various East-Coast vets to a wonderful hospital in nearby Aurora, VCA-Aurora, which is part of the large VCA hospital system, and a fine, well-staffed, 24-hour modern animal hospital which is even closer to us now than RBVH was back in NJ – a 35/40 minute ride at worst. And one good thing about this part of Illinois is that there is virtually never any traffic anywhere, unless one is headed in towards Chicago. The medical staff are skilled and we have established a good working relationship with their management team. They are also giving TMF a 15% courtesy discount on a range of items, and every such concession helps.

All the normal activities of the Foundation are being carried on, as usual:

So there we have a wrap-up of when and how we moved the cats to Illinois and what’s happening today. Everything is running smoothly now that we’ve been here for six months, and we anticipate no significant changes for the next few years.

The one-time cost of the transition has most certainly taxed our limited resources. Annual vet bills are on track for a budgeted $31,000, with food budgeted at $37,000 and Medications budgeted at $3,000. The total expense for the year will come in around $84,000. We are deeply appreciative of the support we have received from our loyal donors in the past, and we are hopeful your generosity will not wane, as we need your help now more than ever.